A statement from the Bandilang Itim Collective.

Two days after celebrating World Press Freedom Day the Philippine government in the National Telecommunications Commission (NTC) ordered the broadcast network ABS-CBN to cease and desist their broadcasting operations. [1]Neil Arwin Mercado, “BREAKING: NTC orders ABS-CBN to stop broadcast operations.” Philippine Daily Inquirer. May 05, 2020. … Continue reading The NTC ordered this because the legislative franchise that allows ABS-CBN to operate expired on May 4, 2020. Included in the cease-and-desist order are 42 television stations and 23 radio stations that are operated by the media conglomerate. [2]ABS-CBN News, “NTC orders ABS-CBN to stop broadcasting.” ABS-CBN News. May 5, 2020. https://news.abs-cbn.com/news/05/05/20/ntc-orders-abs-cbn-to-stop-broadcasting Normally congress would renew such franchises before their expiry as it had done so in the past, but President Rodrigo Duterte has had a tirade against the ABS-CBN network since becoming president, accusing the network of “swindling” and for refusing to air his political ads during the 2016 presidential election. [3]Pia Ranada, “Duterte to block renewal of ABS-CBN franchise.” Rappler. April 27, 2017. https://www.rappler.com/nation/168137-duterte-block-abs-cbn-franchise-renewal Just days after he signed into law the franchise renewal of the GMA (the rival of ABS-CBN) Duterte had gone on record saying he would even block the franchise renewal of ABS-CBN. [4]Ibid. We do not doubt that the franchise was willfully allowed to expire without a renewal as Duterte’s allies dominate both houses of congress.

The deliberate procrastination on the renewal of the ABS-CBN franchise is yet another attempt by the state to control media and journalism in the archipelago. We remember how in response to journalism critical of Duterte’s murderous “drug war,” the state harassed and launched criminal charges against the online news outlet Rappler, culminating in the arrest of Rappler head Maria Ressa for libel. [5]AFP News Agency, “’Won’t be intimidated’: Trial opens for Philippine journalist.” Al Jazeera English. July 23, 2019. … Continue reading

Freedom of the press remains elusive as ever in the archipelago. Before there was even a Republic to speak of, journalists and writers were already heavily censored by colonial authorities. [6]Ferdinan S. Gregorio, “In Defense of Freedom: Philippine Press Through the Ages.” National Historical Commission of the Philippines. September 4, 2012. … Continue readingWhen the Philippines did become self-governing, the country suffered from either constant political maneuvering or outright suppression by state forces. Events such as the declaration of Martial Law in 1972 and the Maguindanao Massacre in 2009 showed that impunity against the press was already prevalent well before Duterte’s presidency. [7]Jodesz Gavilan, “From Marcos to Duterte: How media was attacked, threatened.” Rappler, January 17, 2018. https://www.rappler.com/newsbreak/iq/193882-threats-attacks-philippines-media-timeline However, not only did the everyday Filipino discover the lengths the government would go to silence critics, they also discovered the complexity of issues involving corporate media outlets like ABS-CBN. [8]See our piece on World Press Freedom Day: Malaginoo, “Fear and Favor: Freedom of the Press in the Archipelago.” Bandilang Itim. May 4, 2020. … Continue reading

The Question of Labor Practices

In the fiasco around the possibility of the broadcasting franchise of ABS-CBN not getting renewed, let us not forget all the workers who would be overshadowed by this clash between the state and commercial media elites. These workers have had individual and collective struggles against the ABS-CBN management that predate the controversy over franchise renewal.

As early as 2010, the ABS-CBN terminated 114 media personnel from the International Job Market after they refused offers by the network for contracts that would limit their tenure and ignored their regularization and years of service with the company. What followed was a weeks-long strike by the International Job Market Workers’ Union and a legal battle that drags on to this day. [9]Patricia Lourdes-Viray, “Violation of workers’ rights getting worse – Labor Group.” Bulatlat. May 21, … Continue reading In March 2020, the Court of Appeals upheld a decision by the National Labor Relations Commission that 7 of these workers were “regular employees of ABS-CBN and were illegally dismissed from their employment.” [10]Abogado.com.ph, “CA Deals another blow to ABS-CBN’s labor practices.” Abogado.com.ph. March 19, 2020. https://abogado.com.ph/ca-deals-another-blow-to-abs-cbns-labor-practices/

While the discussion of franchise renewal raged on in Congress, labor groups and progressive personalities called on the company to regularize all of the some 5,000 contractual workers employed by the network, stating that it would be disingenuous for ABS-CBN to ignore their own employees after previous strikes for better working conditions and better pay. [11]Hannah Torregoza, “Hontiveros calls on ABS-CBN ‘If your franchise is renewed, regularize your employees’” Manila Bulletin. February 24, 2020. … Continue reading

This labor struggle between ABS-CBN and its workers was even used by the Duterte administration to appear to be on the side of the workers against the network. [12]Philippine Daily Inquirer Editors, “Duterte: ABS-CBN violating anticontractualization laws.” Philippine Daily Inquirer. June 11, 2018. … Continue reading Yet this is a hypocritical maneuver as we know the Duterte administration has reneged on all its promises to labor and the only concession on the issue of contractualization is an inutile concession that only made the issue worse. [13]Sofia Tomacruz, “TIMELINE: Duterte’s promise to abolish endo.” Rappler. July 6, 2019. https://www.rappler.com/newsbreak/iq/201468-duterte-endo-contractualization-promise-2016-to-2018

Let it be clear, however, that our support for the continued operation of ABS-CBN is because we are taking the side of those journalists, workers, contractals, and talents that could lose their livelihoods over the cessation of operations. We oppose this cease-and-desist order as this will lead to worse living conditions for the network’s rank-and-file as well as their lesser-known contractual workers and talents. [14]Nicole-Anne C. Lagrimas, “Labor Group urges SC to rule for 11,000 ABS-CBN workers” GMA News. February 26, 2020 … Continue reading

Our solidarity belongs to the workers of ABS-CBN, without whom the network would literally be nothing. Were it not for the people behind the cameras, in the control rooms, and out on the street doing research and gathering information, we would not be as well-informed as we are now.

We are also in solidarity with the people who depend on the network for information and entertainment; as commodified as it is, some places in the archipelago sometimes do not have other channels due to unequal distribution of broadcasting. We are in solidarity with all who struggle for the freedom of the press against such naked attempts by the state to foreclose this freedom.

We oppose the ABS-CBN shutdown because it would also set a dangerous precedent. If the media and the press could be brought to heel by making an example of ABS-CBN, we might experience first hand what philosopher Hannah Arendt was trying to warn us about when we lose a free press:

The moment we no longer have a free press, anything can happen. What makes it possible for a totalitarian or any other dictatorship to rule is that people are not informed; how can you have an opinion if you are not informed? If everybody always lies to you, the consequence is not that you believe the lies, but rather that nobody believes anything any longer.

Since Duterte’s ascension, there has been a concentrated attempt by the administration to lie to the population. Media workers and journalists have been at the forefront of the pushback against the administration’s campaign of fake news.

We are being gaslit by the Duterte administration by its constant campaign of lies and fake news. Gaslighting at its core is not about lying to someone so much that they begin to believe the lie. Gaslighting is making someone question their own faculties of reason so much that the gaslighter would have control over them by making them give up trying to engage with the world. What does a dictator, a cult leader and an abusive spouse have in common? They all isolate their victims from the wider world. Writ large, this is achieved by preventing access to a wide variety of views and open access to information, something only a free press can achieve.

This societal gaslighting is about developing the kind of apathy that lets tyrants rule with impunity. People isolated, uninformed, and disengaged are people who are easy to control. 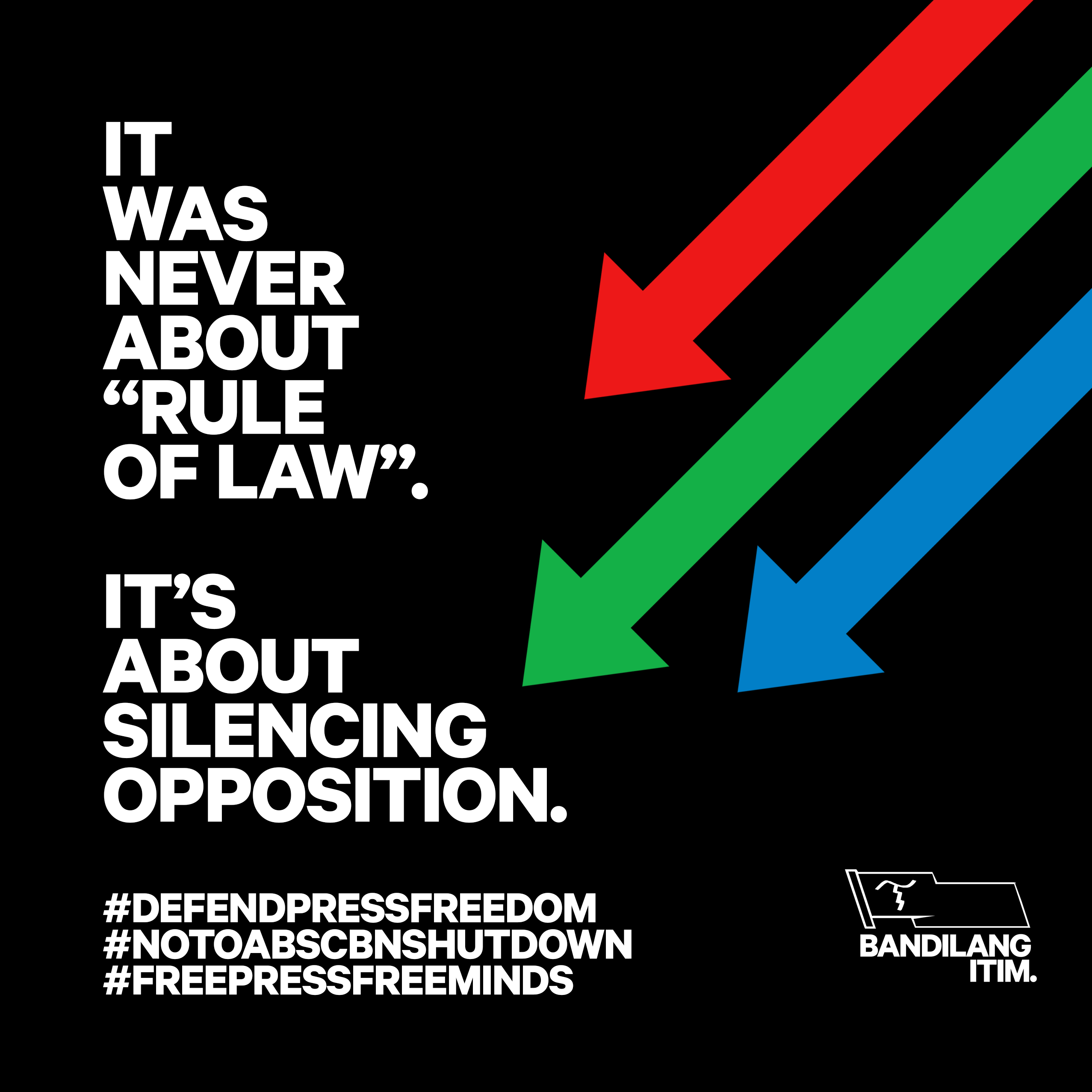 In the immediate term, we would join the chorus of people and civil society groups clamoring for the renewal of the broadcasting franchise of ABS-CBN. However, as anarchists we are ultimately opposed to the continued commodification of journalism and entertainment.

Freedom of the press is ultimately impossible under capitalism. If the state does not actively take part in censoring and delimiting information, it will be the corporation and commercial media elites that commodifies, censors, and delimits. A consistently anarchist position would argue for a truly free press, free from not just government censorship and harassment, but also free from commodification and corporate interests. Our journalism must be liberated from the tyranny of profit which chains journalism to the need to make money. Chaining journalism to profit limits its full potential. As a commodity, journalism is curated to serve the needs of capital and prevented from ultimately challenging authority in all its forms. Our journalism cannot be free so long as journalism is owned by the oligarchs, capitalists, and commercial media elites. Journalism will never be free as long as it can be a thing to be owned by the Lopez family and all other ABS-CBN stockholders.

Against this commodification, what could a decommodified press and media look like? How could we concretely liberate our presses from the tyranny of profit?

We would suggest by making journalism not a thing to be owned by a stockholder or oligarchic family and instead held in common. We call on the workers of ABS-CBN and all other media outfits to communize their networks. We call for the daily management of the network to be done by the workers of the network themselves with decisions deliberated democratically by the workers themselves. We essentially call for a workers’ self-management that would run the workplaces and exclude the Lopezes and the stockholders from having a say in running the network. We are calling for workers to expropriate ABS-CBN on behalf of the people writ large.

A communized journalism would be made non-profit and decommodified. Ownership of the network would be in the hands of the people as a common good while daily management would be done democratically and autonomously by the workers themselves. Oversight over the communized networks could be done by an assembly and delegate system where all groups having a stake in the matter can send delegates. Under communization, there would be no more contractualization and no more lay-offs, only a network that would purely act “in the service of the Filipino” instead of in the service of capital.

We do not doubt that such a program seems far-fetched while we still live within capitalist society. Indeed, communization and decommodification without a social revolution that sweeps away hierarchical social relations like the state, wage-labor, and money would isolate such attempts and cause them to fail. Communization cannot be done in isolation.

Right now, our immediate priority is to safeguard the livelihoods of the media workers employed in the television and radio stations of ABS-CBN which can be done through the agitation and support of the network’s calls for franchise renewal. Next we would agitate for the regularization of all workers in ABS-CBN and to support labor militancy within ABS-CBN and other networks. Our ultimate goal would be the decommodification of media and journalism writ large which we think can be accomplished by communization and social revolution.

The issuance of this order by the NTC clearly shows that the State, especially under the regime of President Duterte, will do anything to silence its critics and dissenters, even if it means they will take down one of the largest media outlets in the Philippines. Now that the administration butt heads with ABS-CBN, who knows what more they are willing to do to attack the press, and suppress the free minds that still remain?